Can I Re-Take The GMAT And Write My MBA Essays At The Same Time?
Maria |
November 24, 2020
So, it’s CRUNCH TIME. A big b-school deadline is right around the corner, and you’re getting in the zone. Buckling down to start to assemble your application. As you spend more time on schools’ websites, you start to get a sinking feeling when you look at their “accepted student” statistics. Your GMAT score is WAY below their averages. Maybe it’s even below their “mid-80%” cut-off. UH OH. First of all. Do NOT necessarily abandon hope. As you may have learned in the ApplicantLab’s “Strengths and Weaknesses” module, there are several ways to combat / counter a low GMAT score.

IN SUM: YOU MIGHT NOT HAVE TO RE-TAKE IT.

“But — if I really, really want to re-take the GMAT AND write my essays at the same time, can I?” Yes.. (see below)… BUT I don’t recommend it. Especially if you’re just now getting started and have yet to see just how much work the essays / letters of recommendation are (which, BTW, they are going to be a TON of work, even if you hire one of the most expensive firms out there — after all, you still need to do the writing, you still need to be the one to sweet-talk your recommenders, etc….).

My worry is that, if you try to do both at once, you’ll end up with a half-assed result on both of them.

I know this isn’t what you want to hear 🙂 So — here’s how you can power through and try to do BOTH things in a COMPRESSED time-frame:

There are actually 2 ways you can try to do MBA essay-writing AND GMAT Prep at the “same time” (in a compressed time-frame):

If you have other “evidence” in your profile that you really ARE good at quant/verbal, and the score is just a fluke… you might be able to get away with this instead.

Let’s dissect the 2 re-testing options in a bit more detail, since that’s why you’re here:

Option 1: Taking the GMAT a few weeks before the deadlines, and then powering through essays right up until the deadline (not as recommended)

Here’s what you would do: I realize that I am tooting my own proverbial horn, but if you go through the exercises in the ApplicantLab, you CAN get to essay drafts, and the polish those drafts, within a couple of days. Last year, a user told me he got to a draft of an essay he had “stared at for weeks” within only a few hours. Another user told me he was able to write essays for FOUR schools in ONE WEEK. Would the essays have been better with more time? YES, ABSOLUTELY, 100%. But – CAN THEY BE WRITTEN QUICKLY, once you know what AdComs are looking for? YES INDEED. (Start here for a quick infographic that tells you which steps to take)

When would someone choose THIS option?

I’ve only begrudgingly “allowed” one person to it this way — the reason being that she felt that the score truly was a fluke, and with the test prep material so fresh in her mind, she wanted to re-take ASAP — within 16 days. Practice tests had been much higher; and the questions in quant seemed oddly very easy, which to me said that a mistake must have been made early on in the test which led to Low Scoresville — thanks a lot, computer-adaptive algorithm — and the low score really was due to botching an early question vs. a true reflection of this person’s grasp of the material. Therefore, the challenge was more about “keeping things fresh for a few weeks” vs. “starting test prep over from scratch”.

OPTION 2: Sign up to re-take the GMAT as close as possible to the deadline date. Power through essays / applications in a couple of days or a week or two. Then devote remaining time to test prep (this is the more recommended option)

Why do I prefer this option? This might sound a little weird, but bear with me. If you’ve already taken the GMAT, or even a practice test, you know what a beast it is. As a result, I find that people take it more seriously than they take essay-writing… because you might not have written essays yet, so it might be a bit of an esoteric concept.

If I say to you, “The faster you finish your essays, the more time you’ll have for that super-important GMAT prep”, then it tends to strike more fear into your heart….and is therefore a BETTER motivator than the other way around.

In other words, fear of the test might motivate you SO much that you sit down and do the full ApplicantLab from start-to-finish in a matter of a few days. After all, the more quickly you power through assembling the pieces you need for your application, the MORE time you’ll have (precious, precious time) to devote to GMAT prep. Which is presumably what you want! It’s a real pain-point you’ve experienced before!

Put another way: after a certain point, the “marginal benefit” of each extra hour you spend on your essays starts to diminish, whereas each extra hour of GMAT prep can make a big difference. So I advise to hammer out the essays as quickly as you can, and give yourself as much time as possible for the GMAT.

So in this scenario, you block out several hours of time over several days, or perhaps lock yourself in your room for a full weekend, and see if you can get to full essay drafts / resume / etc. within a few days or a week or two. The ApplicantLab can be incredibly helpful here — you won’t need to waste time Googling around for generic articles, panickedly trying to figure out what to say (or what NOT to say). Just follow the steps, read the advice tailored to you, and GO, GO, GO! Upload your application (don’t hit submit yet), and then spend the rest of your time on preparing for the test (in case you missed it, my article with 3 tips for the GMAT is here). This then lets you look at your application, post-GMAT, with a “fresh” set of eyes — which, trust me, can be much more productive than continuing to re-re-re-re-re-read it in back to back sessions (the essays start to melt together if you don’t take a break from them). If you take the test the day before a school’s deadline, then that evening or the next day you can double-check the application materials (that are already waiting to go) to give them one more sanity-check, and hit submit. THEN: spend several hours doing absolutely nothing to decompress. If you like laughing, let me know and I’ll send you a bunch of funny videos that will help you unwind from the past few weeks!

“Can I do both at the exact same time?”

You’ll notice that in NEITHER work-scheme is there a version that suggests “spend 1 hour a night on test prep and 2 hours a night on essays”, or vice-versa.

ONLY contaminate your time that way *IF* you find that [preparing for the GMAT / writing the essays] is SO stressful, that [writing the essays / prepping for the GMAT] is actually a welcome mental break; a nice chance to think about something else for a while. For most people though: brain scans and neuro-sciencey things have shown that multi-tasking usually doesn’t work. Mentally jumping between two tasks is very inefficient, brain-wise. Plus, the anxiety from one might start to seep into anxiety from the other…turning you into a big ball of anxiety, which leads to a decrease in productivity, which leads to MORE ANXIETY, and….whew.

In sum, you CAN quickly pull together a full business school application AND prepare to take (or re-take) the GMAT in only a month or two. It will totally suck, but it CAN be done. No matter what, it hinges upon you be able to power through the creation of the essays, resume, and “figuring out what you are going to ask your recommenders to say about you”, in as efficient a way as possible. And this is where I can totally help you! 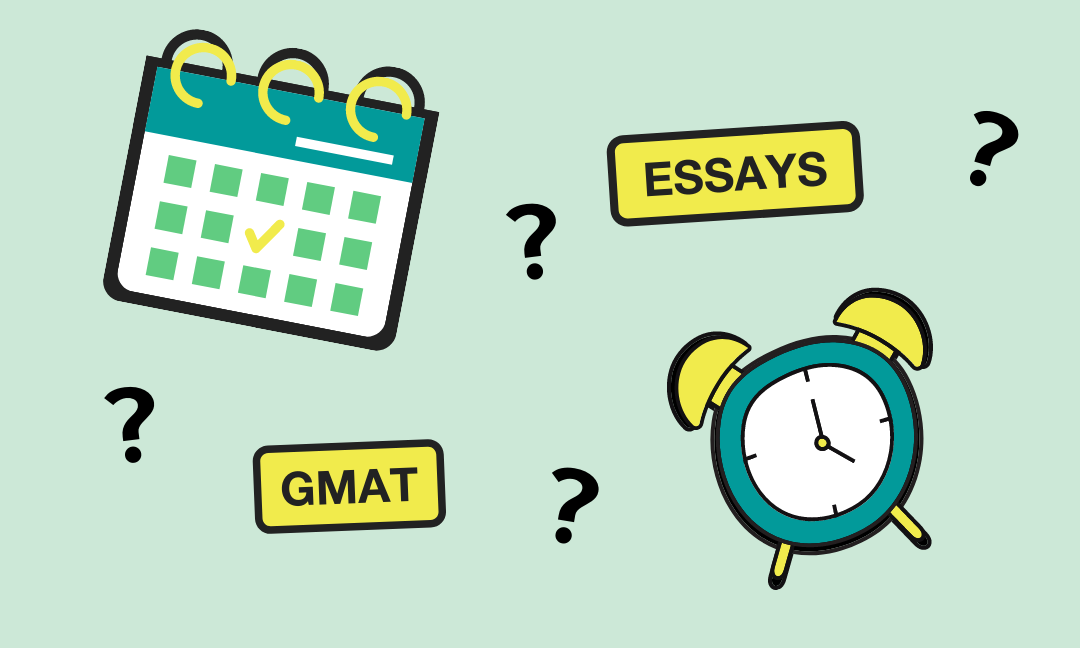