“What are my odds of getting in to [Dream School]’s MBA program?!?”

We get this question a lot.

And… we understand why.

Life is so full of uncertainty, and as human beings we crave quantifiable outcomes. This explains the obsession with “Average GMAT score & G.P.A.” charts, and the popularity of so-called “admissions calculators” and “guessing your odds” articles.

And you know what? While imperfect, those things are often “directionally” correct. They are better than nothing at helping you try to figure out where you’ll get in… except that… I entered in the background/stats of 5 close friends of mine who went to HBS (from different educational / professional / ethnic backgrounds). So far, not a single “admissions chances algorithm” has predicted with 100% certainty that ANY of us would get into HBS.

This is because admissions depends upon qualitative, “soft” skills and, ultimately, proving leadership potential. And oh yeah: how likable you are.

Stuff that is tough to put into a “calculator” or guess from a message-board “profile review”.

“So is MBA admissions a game of pure chance?”

So then, is it a complete crapshoot, roll-of-the-dice? Yes and no.

There are people who are “qualified” to get in, and there are those who are “highly competitive”.

If someone is indeed “highly competitive”, then the odds increase, but from “roll of the dice” to “coin toss”.

To be clear: having your GMAT score close to a school’s average may make you “qualified”, in terms of raw intellectual horsepower, but unfortunately, it means jack squat in terms of being “highly competitive” (sorry).

“So how do I figure out if I am ‘Highly Competitive’ for Acceptance?”

Here’s how I advise people to try to figure this out:

You need to find a Resume Twin, someone whose pre-MBA resume looked almost identical to the position, accomplishments, and impact, that you have now…
…and see where they got their MBAs.

How do you do this? Read on…

How to Find a Resume Twin

(and then what to do once you’ve found them)

Step 1: Find people from your same role, in your same company, who went on to do MBAs

How? Via informal networking at work or via LinkedIn.

NOTE: this person needs to have been a TRUE “peer” of yours. By this I mean:

The “functional equivalence” is extremely important. Some examples:

*Psst! In ApplicantLab’s interactive essay-building platform, I tell you WHICH brand traits each school looks for, so you can tailor your essays accordingly! Cool stuff, eh?

So — to summarize the above — the FASTEST way to figure out if you’re “competitive” to a given MBA program is to look at your ancestors…or, well, at least, the people in your role, in your company, who blazed the trail before you.

If your company has never sent anyone to your Dream MBA program, don’t panic — search the profiles of MBA students / alumni who worked at companies / organizations that are similar to yours. Who are your company’s biggest competitors? Which other companies are kind-of, sort-of, doing the same things your company does, with similar # of employees / revenue?

Step 2: Now, do the same search by college

Searching undergrad alums who went to to your Dream MBA can be the next-best thing if your company has never sent anyone to the MBA program of your choice.

The next level of analysis will come down to undergrad. Look through your college’s alumni database, or again, trusty old LinkedIn.

If you see someone from your alma mater as a student / alum of a top business school, look at:

*Just like with your company, if your undergrad alma mater hasn’t sent people to your target MBA programs, then find people who went to an equivalent college in terms of ranking / reputation.

Step 3: Reach out to those people! Now!

Ok, so you’ve searched on LinkedIn, or asked your boss or co-workers: “Say, has anyone around here gone on to get MBAs at Harvard, Carnegie Mellon, UT Austin, etc.? If so, who were they? What did they do around here?”

You’ve found someone who looks like your “resume twin” — that is, their pre-MBA and/or collegiate accomplishments are similar to yours — who is attending / has attended your Dream MBA program.

So next, I want you to reach out to them. Figure out their e-mail address (see if you can guess it from their place of employment). Better yet, look them up on Social Media (LinkedIn, Facebook, etc.) and see if you know anyone in common. Ask that person to make an introduction.

Then, politely request an informational interview.

Get on the phone with your twin, ask them about their pre-MBA background, ask them what they did, and share your background and ask ’em what they think about your chances. If you create a good rapport with them, see if they wouldn’t mind sharing their GMAT / GPA with you. (one non-threatening way to do this is to say, “My GPA was a 3.5, and my GMAT was a 740 — would you say that’s competitive?” — this allows them to answer vaguely and does not put them in an uncomfortable spot, but they still might offer up their own stats in reply).
Also: reach out to your Resume-twin that ended up going to a school that might be a notch or two below your target school. If their background was similar to yours, you may need to cast a wider net.

There is no “MBA admissions chances calculator” on the planet that will be as accurate as finding a “Resume Twin” (or as close of one a possible) and seeing which MBA programs accepted them.

Once you figure out which schools are truly within range for you, ApplicantLab will guide you through how to best present yourself and your accomplishments to the admissions committees!

And look — if things look bad after finding your resume-twin, I don’t want you to despair. As I often tell people: “You’ll miss 100% of the shots you don’t make!”

Apply to DreamSchool if you still want to!

Please do so with a healthy dose of realism. If your GMAT Quant percentile is low, OR If your job hasn’t allowed you to shine, OR If your extra-curricular leadership is / was non-existent, then acknowledge that it’s more like a roulette spin than a coin-toss.

Either way, ApplicantLab can help you craft your strongest application possible. Because rest assured, some other current-day Resume-Twin out there is competing against YOU during this VERY round.

How will you be chosen instead of them? By submitting the strongest application, my friend. 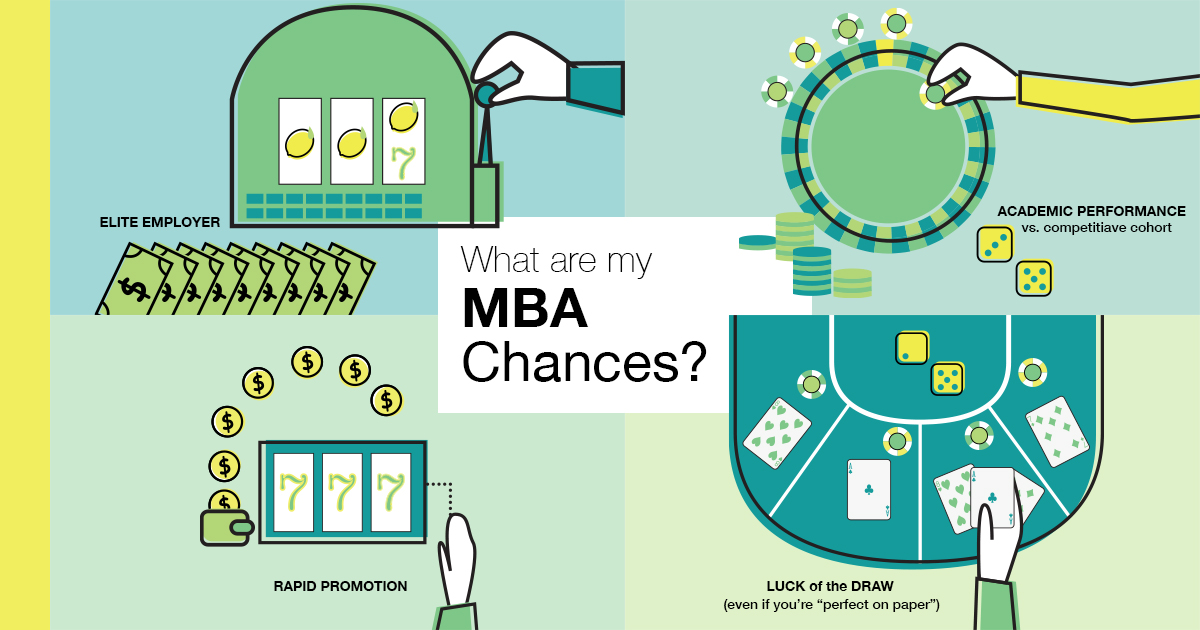