MBA Admissions Committees Have Needs… Do You Meet Those Needs?
Maria |
October 3, 2022

There is a LOT OF HAND-WRINGING on a zillion MBA message boards from candidates anxious to know:

“What are my chances of acceptance to the MBA program of my choice? My GPA is pretty low, so I’m super-nervous…“.

Frequently, messages like this are often accompanied by similar messages along the lines of:

The answer to both of these questions might be found in a concept I call the “AdComs’ Hierarchy of Needs“.

Certain things (like academics) are a hurdle to be cleared. Just like in track and field, it doesn’t matter if you clear the hurdle by 1 mm or by a mile; it just matters that you clear it. Once you do that, then you need to move your way up the hierarchy of needs to gain admission.

The higher up the hierarchy you go, the more work it takes to “prove” it, and thus the bulk of your application should focus on the top of the “pyramid.”

In sum, a business school is ONLY as good as its reputation,

(since those are the alums that go out into the world and make a difference),

but your leadership style and past accomplishments are MUCH more relevant!

I made a video explaining the Hierarchy of Needs here:

To summarize the video:

– MBA Admissions Committees will have a first-glance, gut-check reaction to your profile, based upon certain major elements of your background (e.g. industry, GPA, etc.). If your background comes with any negative stereotypes (e.g. engineers are anti-social; people with low GPAs are stupid), then you need to work to counter those weaknesses in your profile (the entire strengths & weaknesses module of ApplicantLab does exactly that)

– Schools are not simply looking at academics: basic academics get your foot in the door, but a 790 GMAT from someone with a boring work profile will never, ever get in over someone with a 690 who has moved mountains.

– Once you prove that you can handle the academics — well, that’s just the first step. THEN you need to prove:

– Basic “EQ” / people skills  (do people like to work with you, or will you embarrass the school’s name later on?)

– Post-MBA employability (can you hold down a job, or will the corporate recruiters regret hiring you — which also reflects poorly upon a business school!)

– “Leadership potential” (an often-used term that we describe in detail in the ApplicantLab — we help you find your best leadership stories) (can we predict how likely it is that you’re going to go out and change the world, given where you’ve been in the past)

And — once you prove the “basics” lower down in the pyramid (e.g., “Yes, I can handle the coursework”), then the other 3 factors will come more into play.

EQ / Employability / Leadership is what separates acceptances from rejections,

And especially “Leadership” separates acceptances from the super-elite schools from the “still very good” schools.

I hope you found this concept useful. I often find that MBA message-board posts focus WAY too much on basic statistics like G.P.A. or GMAT / GRE — and while yes, there is a certain minimum threshold of a minimum GMAT / GRE score that will probably result in instant rejection (though now more and more schools are allowing people to apply with a standardized test waiver! So certain candidates with some specific backgrounds don’t even need to take the test!), GPA is subject to much more thoughtful consideration (that is, a 3.9 GPA in “Staring at Your Belly Button” studies from NoName Joke College will *NEVER* be as well-respected as, say, a 3.3 GPA in chemical engineering from MIT) , and as such, merely the raw number on its own doesn’t mean much in terms of predicting acceptance. 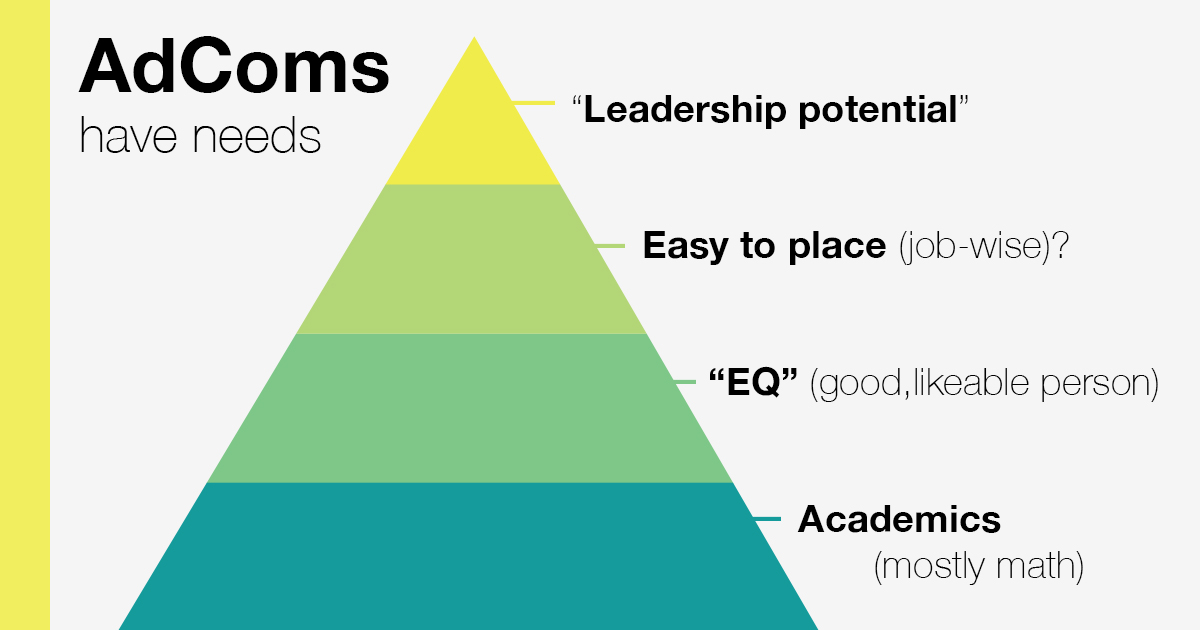